Ioana from Burlington: “We were preparing for Easter celebration 2013 (the ‘sahaj way’ ) with the newer yogis and yoginis from Halton and Niagara regions. Few weeks prior to the Easter we had several gatherings  in our area to introduce these eager and deep ‘new ones’ to the subtleties of a sahaj celebration, that offers not only a  profound meditation experience, but requires as well a connection to the Divine Principles. During the occasions of ‘sahaj pujas‘ a deep state of  Bhakti (veneration) in Yoga(connection)  is expected from 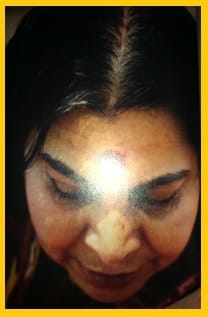 One evening we gathered at Perviz in Mississauga after the weekly class, and we talked about Jesus Christ as a Divine Principle governing the Agnya chakra (the 3rd eye) and his role within the system of chakras and energy channels, as well about the spiritual connection between Shri Mataji and the Son of God. That evening had incredible vibrations! Many wondrous things happened that night during our purely Sahaj Togetherness. For instance we talked about Agnya Chakra and Jesus Christ being The Light and that he is the Lord of Agnya Chakra. We were reading from sahaj mantra books, and there was one description of Jesus being the Light in the eye of Shri Mahalakshmi (Mother Mary); Then, we had Holly  (new yogini from Burlington) expressing her spontaneous desire wanted so much to look for a photo in which Shri Mataji is in meditation; she opened the mantra book and noticed a picture that she really liked and she took a photo on the spot; the result is in the photo above. Isn’t this a beautiful ‘coincidence’?!

Later in the evening we talked in more detail about the puja, vibrations were so strong; all of a sudden we saw in front of our eyes, how a diamond like sparkle – exactly the sort we see in Disney movies about magic  and fairies – had appeared above the little candle. It was not a fire sparkle. It was absolutely pure white, rounded as a little diamond and left traces like star dust on its trajectory. It lasted few large seconds while moving vertically, then it disappeared. That was a beautiful pure divine gift for us to treasure forever. Such a magical evening!”

Helen from Oakville class: ‘We were looking at (Shri Mataji) Mother’s photo while Ioana was explaining the significance of the elements of the puja.  Suddenly, a tiny spark of light appeared and fell across Mother’s photo with a tail of light just like the falling stars in the sky.  It was awe-inspiring.’

Colleen from Burlington class: ‘We were at a great Sahaja Yoga Meditation class in Milton-Misissauga and just watched an amazing Shri Mataji video.  We then gathered together, a few shakti yogini sisters, to plan and organize some different events.  The vibrations were wonderful, so strong!!  Near the end of the gathering there was a couple of us who hadn’t been to a puja before so we were being shown what the format was and how it all happens.  There was a beautiful alter set up with some offerings and a picture of Shri Mataji and a picture of her feet and there was a candle lit in between the two pictures.  The explanation was just winding down and we were all just admiring the whole scene at the table when a small  spark rose from the candle right in front of Shri Mataji’s picture, we all let out a gasp of unbelievable surprise when we saw it.  It was one of those quick joyful unforgettable moments!!’

‘You must gain your confidence by your experiences which you have in Sahaja Yoga. As you were singing yesterday – miracles every day, miracles around you. These are done by the angels and they try to convince you that : “You are one of us, just join our company.”

So we have so many Angels now sitting here, and why should we not think of transforming this world ?!’

What is the Gold’s Value when The World is Fragmented ? Seeking in Sahaja Yoga: Subtle versus Gross as Light in Darkness