Attention: This article is a compilation of quotes, videos and images that will help those that are playing now the Sahaj Guru Game 2013. Lots of sahaj information for teams  #8, #9 and #10. Make sure that you watch the 2 video talks while making notes (!) and that you do reach out to the hints-comparisons-connections that are presented by the end.

“Shri Hanumana is a great character in our being and he runs all the way from Swadhishthana (chakra of creativity) to your Brain and he supplies all the necessary guidance we need in our futuristic planning or in our mental activities. He gives us guidance and protection.. He can fly in the Air.. Controls the Ether and the glands.. He gives Conscious in human beings …He is a Great Engineer ” (more in # 1 video)

Wikipedia: Gabriel (Gavril, Jibrail, Hanumana) is known typically to serve as a messenger to humans from God. In Islam, Gabriel (Jibrail) revealed the Quran to the Prophet Muhammad over a period of 23 years.

Luke 1:10 And the whole multitude of the people were praying without at the time of incense.
11 And there appeared unto him an angel of the Lord standing on the right side of the altar of incense.
12 And when Zacharias saw him, he was troubled, and fear fell upon him.
13 But the angel said unto him, Fear not, Zacharias: for thy prayer is heard; and thy wife Elisabeth shall bear thee a son, and thou shalt call his name John.
14 And thou shalt have joy and gladness; and many shall rejoice at his birth.
15 For he shall be great in the sight of the Lord, and shall drink neither wine nor strong drink; and he shall be filled with the Holy Ghost, even from his mother’s womb.
16 And many of the children of Israel shall he turn to the Lord their God.
17 And he shall go before him in the spirit and power of Elias, to turn the hearts of the fathers to the children, and the disobedient to the wisdom of the just; to make ready a people prepared for the Lord.
19 And the angel answering said unto him, I am Gabriel, that stand in the presence of God; and am sent to speak unto thee, and to shew thee these glad tidings.

Wisdom versus Conscience (Power to Think)

”So how much He gives us! I mean, we can say if Ganesha gives us the wisdom, then He (Hanumana) gives us the power to think. He protects us also, that we should not think of bad things.

That is, we can say that, that if Ganesha gives us the Wisdom, then Shri Hanumana gives us the Conscience. I hope you understand the difference between the two. Wisdom is where you do not need conscience so much because you are wise, you know what is good, what is bad. But conscience is needed in a personality where he is to be controlled, and that control comes from Shri Hanumana, which is the conscience in the human being. Now this conscience which is Shri Hanumana is the subtle form of Him which gives us – is in Sanskrit called as “satasat vivekabuddhi”:  “sat” means truth, “asat” means untruth, and “viveka” means the discrimination, and “buddhi” means the intelligence. So, Intelligence to Discriminate between the Truth and Untruth is given to us by Shri Hanumana.

In the Sahaja Yoga system, if we say that Ganesha is .. the Chancellor of the University. He is the one who gives a degree to us: “Now you have crossed this chakra, that chakra, that chakra.” And He helps us to know what state we are in. So Ganesha gives us, nirvichara samadhi which we can call it as the thoughtless awareness, and nirvikalpa samadhi (Sanskrit for doubtless awareness) . He gives all that, and also He (Shri Ganesha) gives us Joy.

But the understanding that this is good, this is for our benevolence, mental understanding, comes to us from Shri Hanumana. And it’s very important for Western people because it has to be mental, otherwise they won’t understand. If it is not mental they cannot come into abstract. It has to be mental. And so the mental understanding of whether it is good or bad is given to us by Shri Hanumana. Without Him, even if you become a saint you will be – of course :-), you are a saint and you will enjoy the saintliness; but whether this saintliness is all right if you live on Himalayas, or is all right when you go across to people to give them realization – all this scanning, this vivekabuddhi, all this scanning, all this discrimination, all this guidance, all this protection is given to us by Shri Hanumana. “(excerpts above are from  Shri Mataji: Talk on Shri Hanumana, Germany, 1990)

Even Colours: Red versus Orange – Also: Settled versus Mobile

”If Ganesha is painted red, He (Hanumana) is painted orange. And as Ganesha has to settle down permanently in one place, he uses Saint Michael (known as Bhairava in Hinduism) to run up and down the left side (as a power along the Moon-Left subtle energy channel); while Hanumana can run up and down, he need not settle down at a place.” (Talk on Shri Ganesha, 1982 – Genoa,  Switzerland) 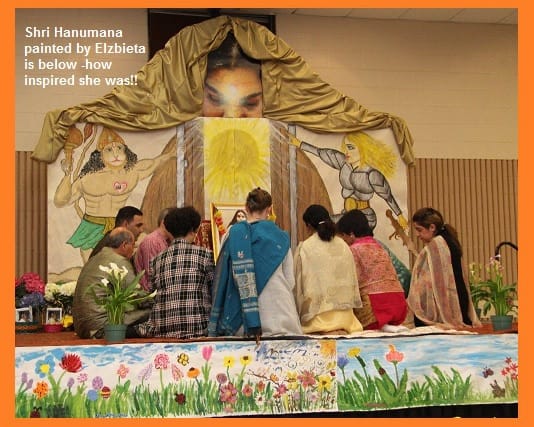 “Now to help the fun more, we have got Hanumana. He helps the fun part of Shri Ganesh. Like Ganesha who plays tricks of fun on the people who are left-sided (people with imbalances on the Moon-left energy channel), He plays His tricks on the right-sided people (on those with imbalances on the Sun-Right energy channel). But this only He does to the people who are innocent. But to the cunning, He punishes. He’ll go on pouring all kinds of miseries, one more than the other, and He’ll say, Now cry more, and cry more. You want to cry? All right, have it more, and have it more.” (Talk on Shri Ganesha, 1982 – Genoa,  Switzerland)

“Shri Hanumana, as you know him as an Angel, has great capacities, great powers, and it is his right to use them, and he is very aware of it. He does everything very amusingly, uses his powers very amusingly. So it’s a playfulness of the angels also because they’re so confident, they’re absolutely aware, absolutely identified with their personality, with their powers, with themselves.” (Excerpts from Shri Hanumana Puja, Talk 1989 – Margate, UK)

”The beauty of his character is that he’s a child, and the childlike behavior of Shri Hanumana has to control the right side, if there’s a right-sided mother or a right-sided father. Normally right-sided people don’t get children, normally. They’re over-right-sided, then even they get children, but they are really not liked by the children because they have no time for children, they all the time are very strict with the children, they shout at them, they don’t know how to handle the children. Or they’re over-indulgent, because they always think that “I never got this, so let me give it to the child.” So these extreme type of people who are right-sided have got this Hanumana, who is nothing but a child. He is very anxious, very anxious to do the work of Shri Rama (who is a divine Incarnation that now is the subtle archetype that governs the right heart chakra within us).”  (Excerpt from Shri Hanumana Puja, Frankfurt, Gernmany, 1990)

”Another  great  quality of Hanumana was that he was very alert and that he was beyond time. Because of that everything he did very fast. He would do the work before anybody could do it. Though Hanumana is running on the Pingala Nadi (right/solar channel) all the time, what he does is to spoil our plans because instead of him, werun on the Pingala.  (Shri Hanumana says to us:) “This is all right, you running it?  I’ll put you right!”  So He sidetracks all our plans all the time, and that’s how all our planning fails.

We are particular about timing, about things of no importance, but we are not particular about timings of our progress in Sahaja Yoga. We must have targets, we must have fixed times – all  right by this time we have to achieve, but do it little faster is better.  All other things can be managed, but this(=our spiritual evolution and progress as a sahaja yogi guru (!)) is your job, nobody’s  going to do it. ”(Excerpts from Shri Hanumana Puja, Talk 1989 – Margate, UK)

”If you take the help of Hanumana, then he tells you that you have to be surrendered to God Almighty and not to anybody else, or to your Guru like Rama. Also in Sahaja yoga I have relationships with you as a Guru, as a Mother and I don’t know – Unlimited; but still these two relationships we know of, that I am your Mother and I am your Guru. Now, as a Guru my main concern is that you should learn all about Sahaja Yoga, you should become experts of Sahaja yoga and you should become yourself the Gurus. This is the only concern I have.

Even this surrendering is done by Shri Hanumana. He is the one who teaches you how to surrender or makes you surrender. The force that acts to make him (the disciple) surrendered to the Guru is also that of Hanumana. He has shown that there is a very beautiful area of right side (known in the chakra system as the Solar channel or Pingala Nadi in Sanskrit). If it is to be perfectly enjoyed then you should be completely surrendered to your Guru. ”

(Note: because a sahaja yogi is connected to the natural elements and has these divine archetypes awakened by Kundalini enery that is active within – that explains how the following last quote is revealing such powerful connections and happenings)

This article is dedicated today, on April 25, 2013 when Shri Hanumana Jayanthi -Birthday celebration takes place in Hindu tradition, to all people that have love, respect or that have heard at least about either Archaengel Gabriel or Shri Hanumana. Hopefully with this article we understand the Oneness in diversity and how the knowledge obtained in sahaja yoga meditation practice unites, explains and embraces the Truth from both East and West;  not only that, but the truth is awakened within so both heart and mind become open and enlightened, simply integrated through the continuous flow of Kundalini energy and nurtured via spontaneous thoughtless meditation.

I also thank to yogis (James, Karl, Emilia), my angel-like friends from around the world that had shared sahaj knowledge about Shri Hanumana today, contributing this way involuntarily to the above compilation. Their beautiful waves intertwined and created this small ripple of knowledge that is further sent out to the seekers that are surfing the web and to our friends from Halton-Niagara classes that have enrolled in the exciting Sahaj Guru Game!