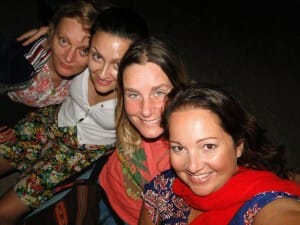 Night Realization Tour of Greece – Motto: «Now you do the work..»

Thanks to my job as a flight attendant bringing passengers to ancient Greece, I had the unique opportunity to meet the Sahaja Yoga team there. We met at the museum of the Acropolis in Athens and we treated each other like brothers and sisters. George had sparked a «realization tour» and sent an e mail to anyone interested in the world. I met Alex and Marina from Russia with whom I practised speaking my 650 words of Russian I learned from my husband. I also met Tatjana, a Russian yogi visiting from London gushing in Russian about the tremendous Vibrations she experienced visiting the Acropolis on the hill overlooking Athens.

She was bubbling with joy. When my vocabulary ran out, we continued sharing stories in English. Silvia and Annbrith were visiting from Sweden and casually invited people in the streets to receive their «experiment with truth».
George from Greece (who has toured the world for spreading sahaj meditation) taught me how to “give realizations” = awaken the innate sacred energy, in basically a minute or two.

It starts with the desire of the seeker to wake up their own Kundalini energy from inside,  and the yogi is silently in a State of Thoughtless Awareness while the seeker opens the hands and  .. then everything else is left up to the divine. We ‘do’ nothing. We are not the doer, but we are the transmitter.

Evening Meditation at the Cave-Prison of Socrates

We visited the cave where Socrates (one of the 10 primordial gurus) was imprisoned. Once we sat down on the benches in front of the cave and surrendered our thoughts, the energy flowed so strong as the land there was emitting clear, cool vibrations.

In the quiet twilight, a lone backpacker arrived to visit the site, and George and Ioannis asked him if he wanted to feel the divine energy inside and receive the yoga (union with the divine). He was very open and closed his eyes and sat with us a long time.
The rest of us meditated to keep the vibrations flowing.

Time stood still and it was so peaceful for all of us.
I asked him afterward if he felt anything and he said he definately did. He was living in Frankfurt, originally from Hamburg and he said in broken but thoughtful English that he felt that it was something that Frankfurt, Germany needed to… “improve the situation.” In his own words, he felt that this could improve the «vibrations» of where he lived. A true seeker from Germany came to see where Socrates – the ancient great seeker and primordial guru! – was imprisoned, and he experienced his own realization!
We were all very happy for him and he was so peaceful, like he recognized the truth in the whole experience.

Daily Meditation @ 4AM by Acropolis

Ioannis, another sahaj brother living in Sweden, was the other «greek language qualified» of our team. I learned a lot from talking and meditating with them all. After the Socrates cave, we climbed up above under a tree and meditated with a view of the Acropolis lit up at night. The vibrations were so good there.
George told us that Uncle Theodore spent a few years coming to that spot every day to meditate at 4pm. George also relayed the information that foot soaks in salt water daily was the key to cleansing our chakras and improving our ability to feel vibrations.

We realized we had a friend/sahaj brother in common from Toronto named Omar, who is very funny

and a very talented musician (check here his Djembe Drum performance with Ahilan at Tabla:

– that was a meditation exercise for Heart Chakra at our Sahaj Valentine last year in Halton (actually at Burlington class). Everyone just loved it!

Back to Greece: Next, some of us bought roasted corn from some vendors and we ended up having them interested to try sahaj meditation on the spot. In conclusion we “gave realization” (by now everyone is familiar with this sahaj term, isn’t it?!) to them and to some curious spectators as well. 🙂 Alexandros from Greece joined our group at the outdoor restaurant shortly afterward. The tour got put on pause as we ate delicious greek food (we were sampling a souvlaki, mousaka and haloumi cheese dinner ..hmm) and shared the dreams we had of Shri Mataji this year. Hopefully George will add his dream to the comments below for all of us to enjoy.

Paula‘s Dream with Shri Mataji becomes the Motto for Realize Greece Experience: «Now you do the work..»

My dream was that Shri Mataji came to visit one of our (Halton yogis) homes during one of our sahaj potluck dinners. She was sitting on a beige couch socializing casually and I wanted so much to bow and do namaste to my guru to welcome her and show my respect. When I got down on the floor and my head touched the ground,
Shri Mataji got up and put her whole body over me.

She was as light as the lightest blanket
but I could feel her presence and knew she was helping clear my chakras.
A long time after, I got up and sat with her on the couch.
She was joyful but seemed a bit tired.
She looked at me and said «Now you do the work…» and Smiled.

Following my Dream’s Message with Realizations in Athens

After dinner we walked down towards Keramikas and felt some vibrations coming from drumming and African dancing in a square off the path.

We watched a multi-cultured group dancing and then gave bandhans to help us approach them and give them some flyers about free sahaja yoga classes and information about the website. One by one many of them received their realization. Interestingly, two guys from Afghanistan were happy and curious to receive the yoga experiment. The Afghan who was translating for the first man did not want to stop feeling the flow, he just kept his eyes closed and his hands open smiling and saying how good he felt.

Every time we raised another person’s Kundalini energy, ours spontaneously rose and became stronger every time.

Close to midnight, we walked further and Annbrith approached a woman from Somalia in traditional dress walking with groceries and asked her if she wanted to receive the energy inside. She dropped her grocery bags and I came to help. She closed her eyes

immediately and opened her hands. Annbrith did a bandhan in her hands and raised her kundalini once. She opened her eyes and she started getting so excited, we continued raising her kundalini. I said, «what do you feel, do you feel it? Where?» And she made a motion sweeping upwards through her center and her eyes were so sparkly, she immediately recognized that something wonderful had happened! She surrendered so fast it took her 30 seconds to feel the connection with the divine energy! The language barrier was not a barrier at all. This was my favourite part of the night. She kept looking at the flyer, then us, and was so amazed, so happy and thanked us. We setup a poster with the subtle system

in a park near a busy club district and continued to give realizations. Two sellers stopped to look at the poster and started telling each other to look at it. I asked one man from Bangledesh if he wanted to try it. He put down his table and goods and opened his hands. He did not open his eyes for a few peaceful minutes. He thankfully took a flyer. The others continued to give realizations late into the night as I left them around 1:30 am. I hugged everybody goodbye after this beautiful, bonding experience and I will never forget the time we spent Together spreading vibrations in Greece.

As I went to the main street, to try to find a taxi, I remembered that the taxis were on strike. The metro was closed and I wondered if I should return and just give realizations till the subway opened. I had to work the flight home that same morning at noon. Then I spotted a yellow car at the busy intersection and waved hoping he would stop. The greek cabbie stopped and insisted I sit in the front because of the strike. He picked up another couple and drove us all home while off duty. He was very joyful and we were very grateful that he helped us out. There were no other taxis on the road anywhere. It seemed this taxi driver, with a sparkle in his eye, was sent to bring me safely back to my hotel.”

Right here this beautiful travel story reached to its end; Paula is a dear sister in our Halton sahaj family and there are many great stories with her. One can start here to find out ‘Who is Paula?!‘.  Thanks go to Nicoleta as well, who visited Greece with a group of Romanian sahaja yogis  almost in the same time with Paula and who enjoyed immensely their most welcoming and dynamic Greek brothers and sisters (in sahaj), as well the beautiful vibrations of this sacred land. If you want to re-discover Greece guided by in depth sahaj knowledge, check out the following two articles.

(audio pearl) Learn About Futility and The Sprouting of the Seed Within – Shakespeare’s Hamlet is Explained, Lincoln’s Vision of Democracy, Understand Other Realized Souls

The Bee and The Buzzz: Sahaja Yoga Meditation featured at 2017 Halton Eco-Festival as a “Phenomenal Organization” by the Oakville Community Centre for Peace, Ecology and Human Rights