** Sahaj (!!) Pathare is a meditation practitioner since early childhood and for the last year he is also a volunteer instructor for Sahaja Yoga Meditation at  the Free  Classes offered on Sundays in St. Catharines.

“Wow ! what a wonderful event it was. Students were so anxious to know about sahaja yoga meditation and actually all wanted to receive from our little team of 4 meditation instructors

(Paula, Jon, Isabelle and myself), a ” full chakra workshop & meditation experience” type of package. 🙂  The divine cool breeze was all over the place and everybody felt it. I think it was very auspicious day today. It was very busy and people were lining up to know what’s happening,  and we were just left with very few flyers and rest all were taken away by students.

The effect was spontaneous , it was pouring, we could feel it . I have attached the photographs just check it out.  It’s almost like vibrations taking over in a couple of them ………………….so excited!!!!!  Yours, Sahaj”

Feedback from Jonathan: “Nothing short of Magical!”

Jon is sharing here: “As a spontaneous surprise, both Paula and Isabelle came with me today to Niagara College to give realization! It was nothing short of magical! Our table was set up just outside of the Administration office with our large “Free Meditation” banner. After that, it was a steady stream of full-on sahaja yoga chakra workshops right from 11 am until 2pm! When people see us “working on chakras”, it definitely piques their curiosity. Most, if not all of the workshop recipients felt something happen during the workshop! Near the end, Sahaj brought 11 people to our booth which spontaneously expanded with many chairs to a full class taught by Paula!

Everyone in the “class” received a brief workshop. As I said, we were right outside the administration office. At the end of the class, Glen (one of the fair organizers) pulled me into the office to talk to Jen who is organizing Mental Health week in March. She wants us back to give a seminar (possibly) for stress management. She took Sahaj’s contact info and my own. Sahaj told her that we need a full class room or auditorium to put on a large program. She is going to see what she can arrange!”

Feedback from the Chakra & Meditation Workshops:

One young lady liked it so much, she wanted to try it again! One young man who was on his way to writing a test described feeling tension in his shoulders and neck melt away. Some of the feedback that was collected:
“I feel completely relaxed!”
“I felt a strong tingling sensation at the back of my head.”
“I felt a rush of cool…”
“I felt something was pulling me higher, then I wanted to sit up straighter, my head was feeling heavy, and then so light…”
“I felt pressure in my head, and then lighter…”
“I felt so relaxed…”
“It cooled off my hands that were full of heat…”
“Harmonious!”
“My head was tingling!”

“I can’t describe it…”
“It felt so nice not to think!”
“It felt so good!”
“Empty! My mind is completely empty” …to describe his state of thoughtless awareness.

Feedback from Isabelle: “Me too!”

“Isabelle called me the night before the event,with her perfect timing, as I finished a week’s work of flying and was waiting for my ride home from the airport. She surprised me with an invitation to do meditation workshops at Niagara College the next day with the promise of a carpool and lunch. Jon, Isabelle and I met up with Sahaj, the student who was the catalyst for this brilliant opportunity to introduce students to a brief meditation workshop. Almost immediately two male students were open to try a 2 minute workshop and sat with their hands open and eyes closed. One student was incredulous, he said he felt like it was a rush inside, and he didn’t want it to stop. He kept smiling and saying how amazing it was. His friend reluctantly opened his eyes, talking to me at first with his eyes closed and emitting calm.

It was like a snowball as students and vendors poured into our chairs for a meditation experiment. I would estimate about 60 students got their realization that day and were so open to receive as friends watched, told each other, and then recommended it to their friends. Two Tai chi practitioners who were vendors there also received their realization. One lady, Lily, stayed in blissful meditation for over 20 minutes. 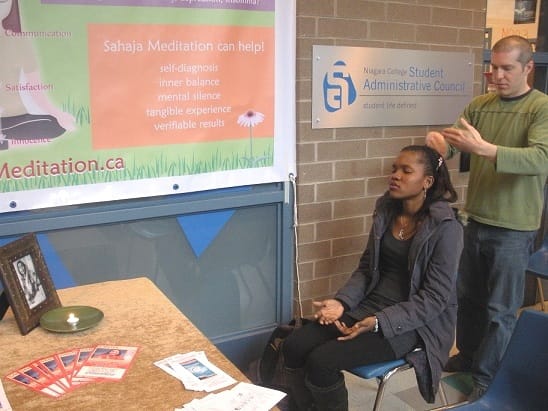 Another girl who was giggling and waiting her turn got her workshop done by Isabelle ended up having such a serene look on her face and spent over 20 minutes in meditation on her own.We nearly ran out of flyers from the flurry of interest. At 1:30pm Sahaj, our fellow yogi, delivered 11 of his fellow students as he promised them ‘an impromptu meditation session.’ 🙂 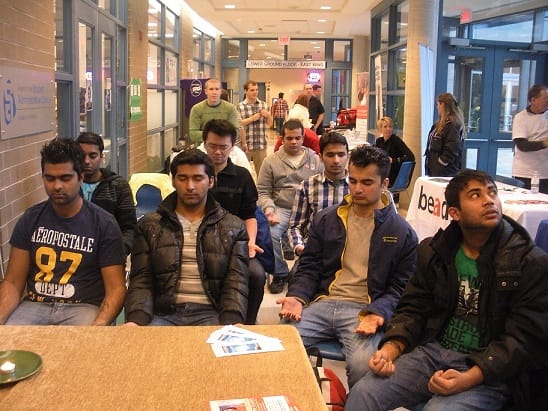 Every single one of them felt something within their own subtle system or chakras (subtle energy centres). They were very respectful, and had a pure desire to meditate and be in the moment. I felt a cool breeze coming out of a couple of people’s fontanel bone area, maybe also because the four of us worked in harmony as “soldiers of love” with Sahaj checking in on us between lectures and gathering seekers. His crew helped us pack our banners up and stuck around to chat. The time just flew by and Sahaj and I hi-fived each other at the end of the last session. None of us could stop smiling. I felt vibrations flowing all day long through all of us. The students were very open, curious, had interesting questions and were very in tune with what they had just experienced. 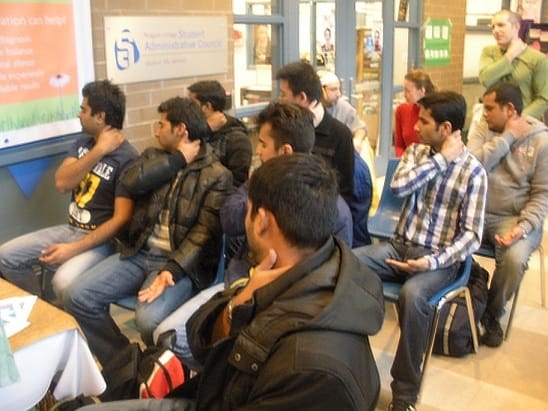 I felt the benefits of giving workshop as my Kundalini energy rose to help raise each person’s Kundalini. Many people were interested in the upcoming classes and we look forward to seeing them there. As a bonus we were invited to come back in the spring to Niagara College for another great meditation opportunity.”

We hope you have enjoyed the stories and the photos -> Yes, the opportunity that was mentioned few times already in the  stories above, had become a reality: We are invited to offer a Introduction to Sahaja Yoga Meditation to the Students at Niagara College next week! When: on March 21st @ Niagara on the Lake Campus.

Something else we have realized at the event that happened at the 2 Days Wellness Fair that started on Valentine’s Day at Niagara College (event that was illustrated in this article): there is a strong desire for the free classes in St. Catharines. 🙂 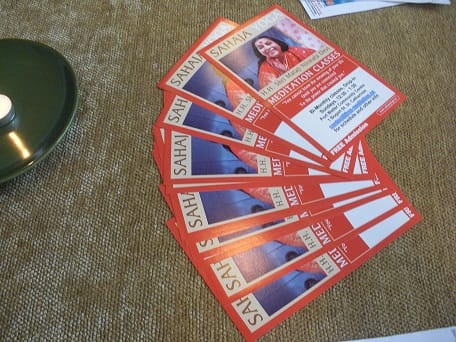 Why we have Sahaja Yoga Meditation? What for? Quick Tour through America’s Virata, Kundalini’s Meta Science & Throat Chakra

Halton Yogis Singing Christmas Carols to You All!