Explore this Article “The Last Walk for The Queen of Yoga: Singing, Roses and Bare Feet” dedicated to Shri Mataji’s last Days at Cabella as described by an Italian Journalist

Enjoy this translation of a great article that appeared in February 2011, in Italy, translated in English by a an Italian-American yogini friend, Anna Mancini. The article is “THE QUEEN OF YOGA” and it appeared in the Italian National Newspaper “La Stampa”. 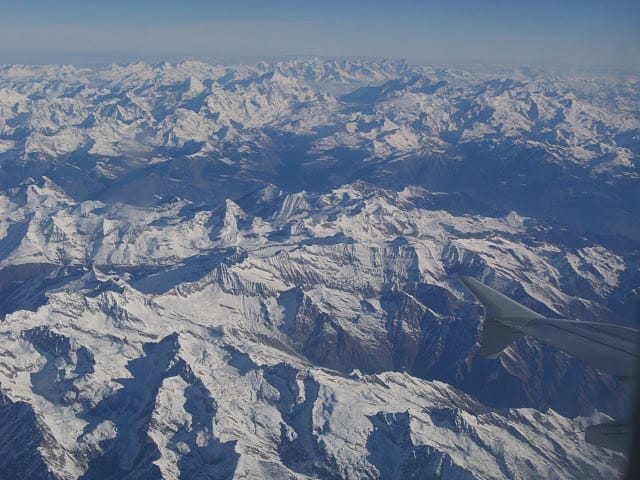 Singing, Roses, and Bare Feet for the Last Walk of the Queen of Yoga

In this  heartfelt article, Miriam Massone, a reporter for the national newspaper “La Stampa,” describes how thousands of people from all over Europe and other countries have come together to honor and pay homage to “The Queen  of Yoga,” In the article’s title,  the reporter describes Shri Mataji as the Queen of Yoga but in the article itself  she refers to Shri Mataji  as a Princess. 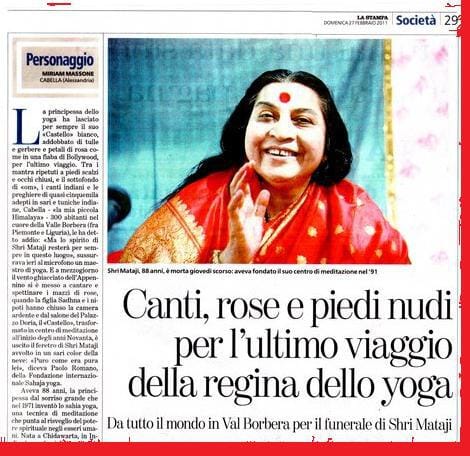 Her Holiness Shri Mataji Nirmala Devi, the founder  of Sahaja Yoga,  passed away on February 23, 2011 in Cabella Ligure. She was  88 years old. Miss Massone states, “The princess of yoga has  left her white castle forever. Surrounded by many flowers, like a fairy tale from Bollywood, she has completed her last journey.” Shri Mataji called Cabella “my little Himalaya” and Palazzo Doria, – a castle which was turned into the home for  her, became a major meditation center where thousands of people from all over the world came together to meditate and practice Sahaja Yoga.

Miss Massone describes Shri Mataji as  the princess with  a great smile. Shri Mataji started Sahaja Yoga in 1970. This yoga meditation  awakens the spiritual powers within  every human being.  She was born in Chindwara, India. Both she and her family fought alongside  Gandhi for the independence of India from the British. Shri Mataji was also arrested and imprisoned by the English as she bravely fought alongside her family. In the 1940’s  she married C.P. Srivastava, a distinguished state official.  Mr. Srivastava continued to support Shri Mataji as she  traveled throughout the world preaching and teaching Sahaja Yoga. 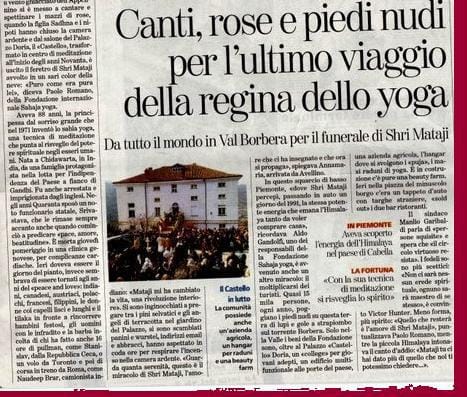 Shri Mataji died in a clinic in Genova from coronary complications. The day of her death was supposed to be a day of mourning. Instead, armed with peace and love,  the disciples of Shri Mataji, arrived from Europe, the United States, the Philippines, Canada, and India. . They came from all over. Navdeep Brar, a Canadian-Indian truck driver stated, “Shri Mataji changed my life. It was a revolution which started from within.”  In the gardens of Palazzo Doria, many knelt, meditated, and prayed. Many shared sandwiches, email addresses, and embraced each other as they waited to pay homage to Shri Mataji. Her  body was placed in the large waiting room of her home where everyone could view her. “Just feel  the serenity! This is the miracle of Shri Mataji. This is the love she has taught us and that we need to share and spread throughout the world,” stated Annamaria, who arrived from Avellino. 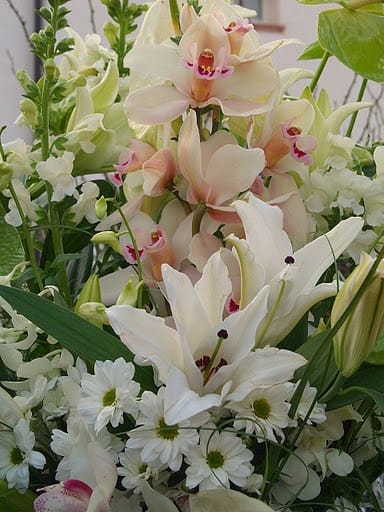 Aldo Gandolfi, one of the directors of the Sahaja Yoga  World Foundation,  states that in 1991, as Shri Mataji passed by this area, she felt the same energy that is felt  the Himalayas. She decided to buy the castle of Palazzo Doria which overlooks the town of Cabella Ligure.  He also recalls another miracle. “Every  year over 15,000 people  come to Cabella to place their bare feet on the land of Cabella  and in the river Borbera.” Besides the castle there is an elementary school for young children, a hangar where sahaja yoga meditation international seminars are held, and an  agricultural company. Also a  farm is presently under construction. The mayor of Cabella, Manlio Garibaldi, states that the people who follow Shri Mataji are exquisite. He hopes that this virtuous society will  continue. Robert Hunter, one of the Sahaja Yogis,  is convinced that  there will be no spiritual heir. Everyone is the master of himself or herself. Less form and more spirit.   As the “small Himalaya”  rang out with the last farewell song, Paolo Romano pointed out, “What will be left of Shri Mataji is Her Love. Shri Mataji, you have given us more than we could ever ask for.”

**Thank you Anna for your hard work and we are looking fwd to receive the translations to the other newspaper articles. Thanks go as well to the various Sahaja Yogis that have sent these beautiful photos and images (Cythare and Surjeet) and to the most welcoming couple from Genoa: Daniela and her husband who stayed all night to scan and send out the articles. Among the many sahaja yogis from Canada that had traveled to Cabella suddenly following the news .., my daughter and I were there, but this time I did not feel to take any photo .. however how much we all long to have these memories captured. Thank you all. More articles are coming soon, thanks to Anna Mancini. Original Italian article is here.

(click) Whiter than Snow Silk Farewell Bow of The Queen of Yoga from Her Himalayas on February 23, 2011

A poem dedicated to Shri Mataji by a Canadian Yogini

A Poem by Shri Mataji

Abraham Lincoln – I used to adore him