“So we are in Holand, which is the Holy Land of Europe.”

** let’s keep our hands towards the screen, see if we can feel the energy -cool breeze- of this video made by a group of  sahaja yogis from Holland in a light manner, full of fun, tulips, sahaj family feeling and spontaneity but also with love for their country’s beauty and with devotion for their spiritual mother/yoga teacher. Below are 2 Newspaper articles on Shri Mataji’s visit in Holland in 1991, simple and interesting.

SHRI MATAJI longs for a “New Awareness” of human beings because now, she says that “Everything is business oriented”.

‘A plain house in Weer street in Zaandam, with little gardens carefully trimmed and fences well cut. But along a path leading to one of the doors, flower petals are covering the ground and red golden-threaded ribbons are hanging on both sides of the entrance door. Here Shri Mataji abides. On her way back from India, she stopped in Holland and gave two meetings last Thursday and Friday in Artis Koningsalle. She is the founder of Sahaja Yoga.
Inside, fragrance of incense and flowers. Shri Mataji is giving a press conference and a little group of disciples sits barefoot, waiting for the small, sixty eight year old lady. A reporter of Krant op zondag (Sunday newspaper) sits ready with a tape recorder, and the other one from the Typhon newspaper holds a draft. Somewhat nervous, we are waiting for the coming of the lady who asserts that she can awake an energy inside us, which should bring involvement to the whole world. Shri Mataji is a source of joy for these people waiting for her in meditation. She likes laughing, her eyes always bubbling with humour, but with an eye on everything, a pleasant voice. She looks happy to meet the ladies of the press delegation. “Woman is the source of love. God is a woman. Churches always wanted God’s division : Father, Son, Spirit. God is the source. It is a shock for Islam but in Koran also it is written that chastity should not be challenged. Women theologians who made the slogan of the poster : “When God Almighty created Man, She made it as a joke” can be relieved. Still the majority of the group of disciples are men. About that also, Shri Mataji can laugh. “The people who follow me are a special category of people. They are looking for truth, lost as they were in the crave for material things but now they are saved.” Mother takes a strong position against this commercial conditioning so vivid in the whole world : “In all areas, they drive people mad. They conceive the fashion in such a ridiculous and limited way and the people just follow them !” She laughs. Shri Mataji will never be surprised by anything. “Look at the hairstyles they are able to create. Everything is done in such a way that you are compelled to change regularly”. Shri Mataji did not form an organization to become a member of. Her conferences are free and her aims only spiritual: to give us our second birth in order to reach a better world. “No paradise after death but paradise on earth. Jesus never promised paradise. Christians read a book and walk on it with eye flaps. After Christ’s words, there is Paul who never saw anything in fact.” 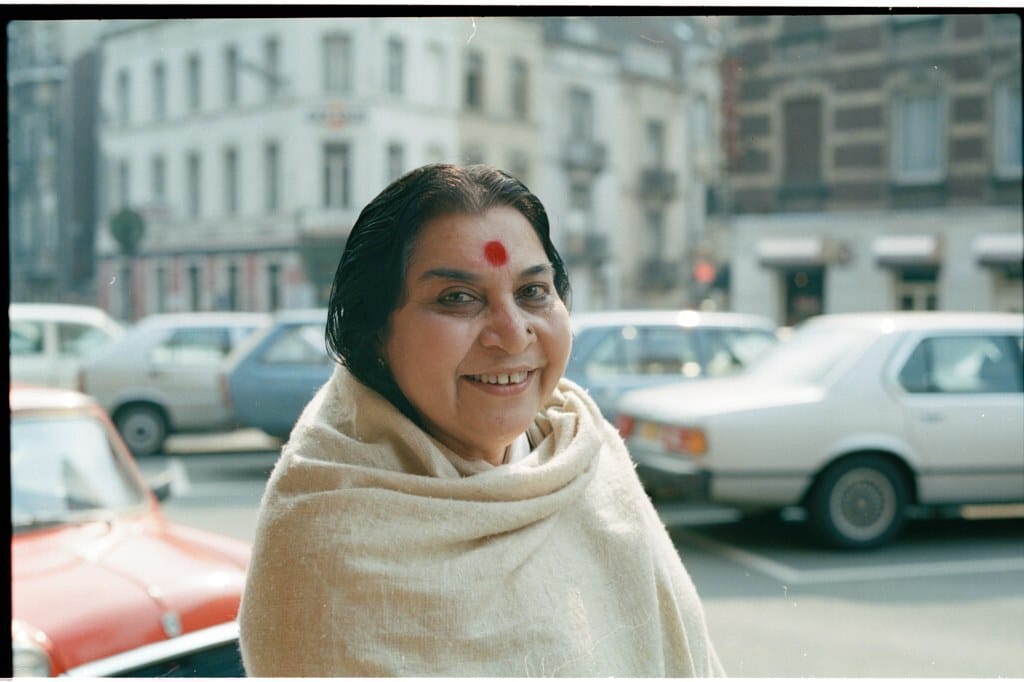 “OTHERS SHOULD NOT TAKE ADVANTAGE OF YOU”

‘In Artis Konignsalle, two ladies are covering Shri Mataji’s armchair. Shri Mataji is a sixty year old Indian Lady who established a new Yoga method : Sahaja Yoga. Her full name is Shri Mataji Nirmala Devi, but she is called Shri Mataji which means : “Holy Mother”. On the armchair, two ladies first put a sky blue cloth, then a light brown one which, finally is replaced by a bright cloth. A photograph of Shri Mataji is put on the armchair. On a white cloth stretched on a metal frame, is drawn a man seated in Padmasana. In the flower-like figures, there are the seven energy centers, called chakras in Sanskrit”, says a belgium Sahaja Yogi giving the introduction.

Sahaja Yoga means “spontaneous”. In this yoga, you have, in fact, nothing to do. Inside our physical body, we have a subtile energetic body : seven main energy centers linked together by the energy channels or nadis. The three most important channels run in our spinal cord. The people who use more their left channel are living mostly on the emotional level, get attached to the past and are easily dominated. “The aim is that the two lateral channels get balanced and allow the central channel to express itself. At the basis of this central channel resides the Kundalini, (Divine Energy) in the hollow part of the sacrum. When she rises along the central channel, you feel her as a cool breeze over your head or on your fingertips.” With Shri Mataji, this Self Realisation is completely manifested. By her sheer presence, she can give that balance to all those who are ready for this experience. The Holy Mother is a little late, the hall is eagerly waiting for her; when she arrives at last, we all get up and make our best to have a glimpse of her. She is small, rather stout, and wears a white sari. She sits in the armchair among lots of flowers. “I bow to all the seekers of Truth” she says. “Truth is that you are neither the body, nor the intelligence nor your conditionings : you are the Spirit.”
“Holland is the country of flowers, but nobody ever wondered how such a small seed can grow and give such a beautiful flower. Our eyes are wonderful micro-cameras but we don’t know how we reached that state of human consciousness. In all the religions, it is said : “Know yourself”. You can’t reach this knowledge by reading books. I won’t get to know Holland by watching a movie about it.” “The only important thing is to wish to become the Spirit. I respect your freedom, and the Divine respects your freedom. Therefore, I will request the people who don’t want to get Self-Realisation to leave the hall”. But who wouldn’t like to get Self-Realisation ? Everybody takes out his shoes to put his feet on Mother Earth. Then one spreads his left hand towards Shri Mataji, with the palm upwards. We put our right hand on our heart then on different parts of the left side of the body, to place it again on the heart. At the forehead level we are asked to forgive everyone. It goes rather fast. Sometimes, we have to repeat several times the same question : Shri Mataji is already talking about something else. Then we rub our fontanelle bone area sevent times asking for Self-Realization. That’s all. Shri Mataji then asks the people if they felt a cool or hot breeze. If you feel a hot breeze, it means you have not yet forgiven. Almost everybody felt something. Shri Mataji is happy. She invites us to come the next evening and leaves the hall the way she came.
“It was crazy”. I said to myself, while coming back. But my feet are so light they almost don’t touch the pavement. It is strange, for sure. Is Self-Realisation only that ? I do feel a coolness around me. Is it a draught ? These things are so subtle !” People should not take advantage of you” Shri Mataji also says that. The experience is what makes you believe in something. In India, 50.000 Sahaja Yogis, and in the West, several thousands tried it. In Delhi University, Sahaja Yoga is taught in the Medical department. A group of English physicians took up a research on Sahaja Yoga. In Soviet Union, the Ministry of Education is trying to find a way to use Sahaja Yoga in order to be able to teach it even more.” 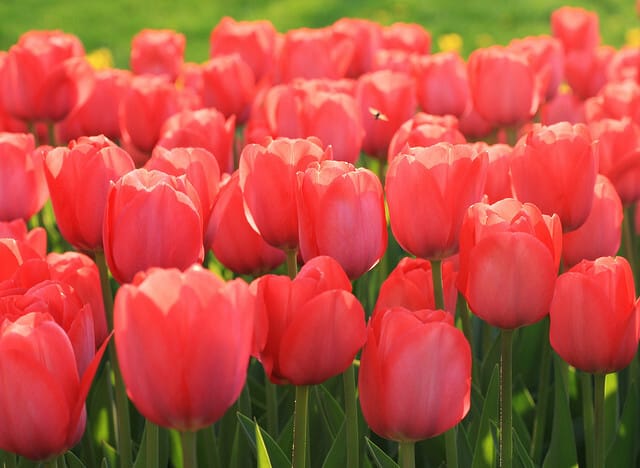 Let’s become bees in search for the most nourishing nectar awaiting for us within the beautiful tulips of pure, spiritual knowledge on Self Realization & Self Mastery, Union (yoga), Balance and Integration: Sahaja yoga meditation.

And the more we

are, the merrier we

(click!) Human Beings have to become a Bee – Know How with Lotus

Stay tuned, we are having a Special Public Event next week @ Burlington Class:  “Experience India with Music, Dance, Meditation and Chakra Workshop“.