More (subtle info, myths & tales) on Makar Sankranti Festival: Symbolic Thanksgiving to the Goddess (Energy of Life) with Vegetables, Fruits & Sweets and Honour the Sun on January 15, 2011 in Meditation

“Because of the warmth of the Sun all vegetation and wealth grows on the Earth. Fruits and vegetables are offered to the Goddess on this day to invoke Her blessings.” 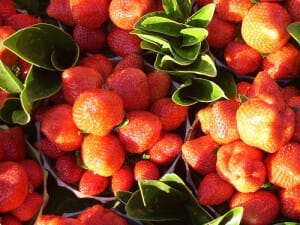 “…..Regarding the Devi, they say that She is Mahakali (also known in sahaja yoga system as the subtle energy governing the left subtle energy channel or the Moon channel or Ying aspect), Maha Saraswati (the energy governing the Sun connected subtle channel) and all. But they are part and parcel of Adi Shakti (this is the primordial energy manifested , the power of life known as the Holy Ghost or the feminine/maternal aspect of God seen as well as the force of  Nature or Life). They manifested at a proper time. The way Goddess Shakhambari manifested in Meerut district. She increases productivity of crops. .. I also used to produce vegetables, such big size of brinjals, tomatoes and cucumbers that one could not believe! This is the power of Goddess Shakhambhari. God has different forms and names and sometimes people are confused about them. But She manifests Herself according to the need of particular area. Durga and Chamunda (deities in Hindu mythology) and many others are Her different Forms…..”

“Makar Sankranti indicates that from this day the Sun will get warmer and warmer. The heat of the Sun is beneficial for mankind. All our movements depend on this heat. But the impact of the heat could also excite Anger in us. That is the reason that on this day we eat Jaggery (Gud) so that we become soft spoken. Because of the warmth of the Sun all vegetations and wealth grows on the earth. Fruits and vegetables are offered to the Goddess on this day to invoke Her blessings. By the blessings of the Adi Shakti the Earth element gets calmed down and human being thrives. The festival of Sankranti has cultural significance too. It is celebrated all over the country with joy and gaiety. It is celebrated in some other countries also but it has special significance in India.” ” This is what is today’s day is a great day for us to change, because  the Sun has changed its mood now. Sun is coming this side. So let us  welcome the Sun, coming to the North now, this way. And for  Australians to say that though the Sun has gone, let us establish the  Sun, the domain of Sun, within ourselves.

Because Sun never disappears  from our Inside.”

“Warmth of the Sun represents the Warmth of God’s Love. This is the  reason why we celebrate this festival by giving you some sort of a  sweet made out of sesame seeds. Sesame seeds are

given because they  are also heat giving and now as we are coming from the cold we come to   the hot season in a way hotter season so to prepare you with that  warmth of the Sun. This special things are made out of the seed of sesame to represent  the oncoming warmth and the warmth of the sun. Though in India the  heat is too much still people are waiting for this time to come in and  they celebrate it with such a warm heart. At this time it is said that they give you this sesame seed and the sugar to eat but now you must  speak in a sweet manner. Speaking in the sweet manner is very important. Some people think it  is smart to speak in a rude manner or is very intelligent to shout on  people but no one likes this kind of a personality, you may be  intelligent, you may be very sharp or smart. Maybe on a television  people may like to see you but not as companions, (nor) as friends. 🙂“

“When the Sun comes on  this Earth back, then all the Creativity of the Mother Earth starts  acting and She creates such Beautiful things like Flowers, such nice  things, Nourishing things like Fruits and Fulfilling things like  Fruits. She makes our eyes cool down with the greenery She has and  the way She blesses us..  In  the same way, now that the Sun of Sahaja Yoga has risen and is coming  to the zenith and it has definitely shown you the result on the Earth  principle that is your Mooladhara and the Creative Power of that  Mooladhara which is the Kundalini, has been rising and rising and  rising and opening your being and showing the results in your lives which has made your lives very beautiful, which has made your life  very Joyous and very Happy.”

Sakumbhari Devi is the deity for the fertility (Goddess of Vegetation on Earth) wherein you worship the vegetables and fruits that spring up from the blessings of Mother Earth in the process of creation in the plant kingdom and is offered to Goddess. There is a Shakumbhari Devi Temple in Uttaranchal and is worshiped with Festive colour .  While, the Makar Sankranti on this day is also celebrated by offering vegetables to the Goddess in her Sakumbhari aspect and consuming Jaggary and Sesame seed (Gur and Til in Hindi ).  Legend tells that this goddess helped the living creatures to survive only upon plants and vegetable, when no water was available on this earth, for full-long hundred years. Hence, she was know as Shakumbhari Devi, i.e the goddess who feeded upon vegetable.

The History of Shakumbari Devi

Long time ago, there was a great spiritual master named ‘Durgam’. He mastered all the vedas (scriptures) by the grace of Lord Brahma and received a boon from him that he will not be defeated in a battle even by gods. After receiving such a boon, he went on rampage all around the earth. He defeated Lord Indra in a battle. Subsequently there was no rain on earth for a century as Lord Indra, the rain-god, was imprisoned by Durgam. The living beings starved for water. In the absence of vedas the Brahmans didn’t perform religious rites. Sensing the disastrous consequences of Durgam’s rule, the gods took refuge with ‘Maha Devi’, the great goddess. They prayed to her, “Oh Mother, the way you killed Shumb’ and Nishumb’ demons before and brought an end of the miseries of mankind, in the same way, please kill Durgam.” On seeing her people in distress, the eyes of goddess were full of tears, out of compassion. She looked at the gods and saints through hundred eyes. The water gushed out of her eyes and thousands of streams overflowed with water. The forests became again green and lands fit for tilling. Rivers, ponds and oceans were again full of water and the gods were again happy. The miseries of people disappeared. As the

goddess of hundred eyes looked at her subjects with the eyes of pity, so the gods named her ‘Shatakshi’ and worshiped her. When whole world was dry for want of rain, then goddess ‘Shatakshi’ created vegetation out of her body and saved world from starvation. For this act of goddess she is also famous as “Shakumbari Devi’.

The splendid form of Shakumbari Devi is described in detail in Durga Sapt-Shati in the last chapter named ‘Murti Rehasya’. According to this, the goddess is of blue colour. Her eyes are like lotus flower. Navel is slightly below the normal place with three curves.  A lotus is carried in her hand, which is thronged by bees. The other hand carries arrows. Other hands carry flowers, roots, vegetables, fruits symbolizing the goddess of vegetation, who feeds us and keeps us away from disease. One hand is carrying a bow representing her fierceness. This is the appearance of Shakumbari Devi, Shatakshi and Durga. This goddess removes the grief and calamities and terrorizes demons. The devotee of this goddess, worshiping Mother by hymns, meditation, Japa and bhajans, attains the fruits of food, drink and infinite bliss.”

(special thanks to Rabi, our dear friend and  sahaja yogi from India who did provide, years back these sweet story tales and many of the above quotes)

What is Makar Sankranti Festival REALLY All About?! First Answer with Miracle Photos (Radiant!)

15 Responses to “More (subtle info, myths & tales) on Makar Sankranti Festival: Symbolic Thanksgiving to the Goddess (Energy of Life) with Vegetables, Fruits & Sweets and Honour the Sun on January 15, 2011 in Meditation”

Leave a Reply to Meeta