Hours of Joy via Soul Music & Meditation with Rachelle – Now in Austria!

Hours of joy with Rachelle at Bad 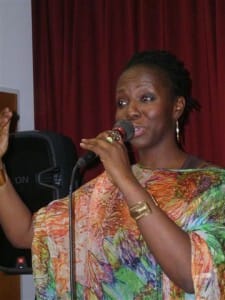 Rachelle, Canadian Singer from Montreal is getting busy touring Europe with her programs of Soul/Gospel Music, Dance and Meditation. We have some beautiful photos coming from Austria this time from  a public program where Rachelle was accompanied on piano by Roland Bumberger (talented “local” musician and sahaja yoga meditation practitioner as well :-))

Rachelle from Montreal Canada - spreading Vibrations and Bringing a deep feeling of Meditation and Spontaneous Connection (sahaja yoga!) in the audiences present to her programs

Of course, the Joy got translated finally into a General Dance as it happens most of the times during the Sahaj Music & Meditation programs.

Dancing on Rachelle's Awakening Music - Kundalini is dancing within too!

At the end, the singing workshop concluded with Rachelle’s powerful rendition of Beatle’s Song “Let it be!” (that is so Sahaj!!) .. and of course everyone realized that we are All simply “just”: Brothers/Sisters & Sisters/Brothers that Share Same World.

We’ll follow Rachelle’s Journey thorugh Europe .. enjoying the news about our talented and vibrant Canadian that is warming up the Winters in .. Europe. 🙂

Stay Tuned! See below an example with Rachelle’s success in Germany!

2 Responses to “Hours of Joy via Soul Music & Meditation with Rachelle – Now in Austria!”

Leave a Reply to ornella