‘for everything what has happened and is happening in my life I can be thankful just to Shri Mataji Nirmala Devi, founder of Sahaja Yoga, for pure energy, pure knowledge, peace and balance… ‘

In these days we all are fascinating by arts, more than ever they play a huge role in our lives. But many a times we are disappointed by the conveyors of art, so often they tend to be selfish, superficial and materialistic, very much ego-oriented, despite the great roles the artists play or display. Seeing Petras being natural, his genuine (= sahaj!) joy and emotion are totally “out” but in the same time, when it was all about “him” / his talent .. he did rememb and mention, first and foremost the name of his spiritual mother and teacher: Shri Mataji. Very touching for all of us that feel the same regarding all our successes in life, that by practising of Sahaja Yoga Meditation we can experience and understand these ‘successes’ at another level. Hope you’ll enjoy this news and that you’re open to learn about talented actor that is not from Hollywood. 🙂

SHORT VIDEO from the Award Ceremony

And in an email, Petras adds:

“there was great opportunity to thanks Mother (Shri Mataji) and to say loud and proud Her name- the greatest mantra of all mantras..it was a live broadcasting so there was about 300 000 people who heard this 🙂 ..
thank You Mother for everything…. 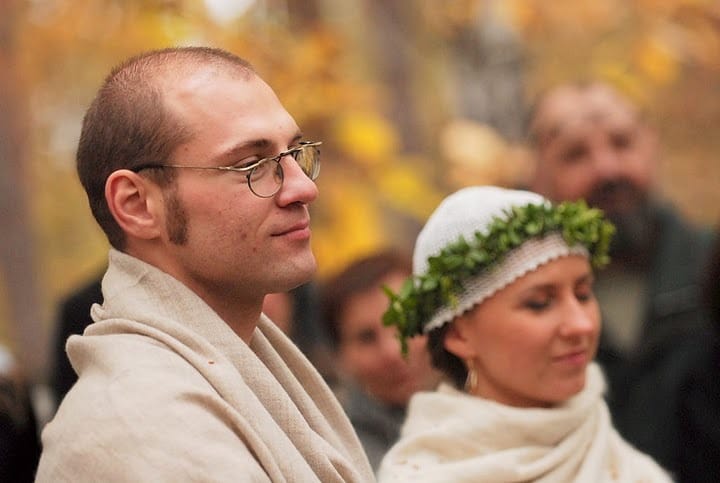 More about our new friend Petra:

Petras Lisauskas was born in 1981, in Alytus. In 2000-2002 he studied Architecture at Kaunas Technological University. Since 2003 he studies contemporary dance at Lithuanian Academy of Music and Theatre (head teacher Aira Naginevi?i?t?).

“The beginning of the composition was intriguing. A body dancing within white sheets as if in placenta, looking for the way out to freedom, the freedom that it “tests” repeatedly by putting the leg out until the desired freedom is achieved. Then, the body rises up slowly from the ground trying to orientate itself, stands on both feet and looks at the world from a higher point of view. Following a short but powerful dance insert, video image depicting the dancer himself is projected on his half-naked body. The image is soon reduced comically and transferred on to the ground. Ingenious lighting and music selection of the performance are really worth mentioning. Although these elements most often remain of secondary importance in performances by students, they played an extremely important role in the project by T.Gurevi?ius and P.Lisauskas.

P.Lisauskas is a very interesting personality as a dancer. His rough plasticity can still be improved, but his artistry is much more interesting, attractive and memorable. We have already seen him as such in the premiere of the dance performance Footprints by Vytis Jankauskas, where he enacted (although he didn’t have to dance much) fate, destiny, “reality.” The character in The Crossroad lacked certain basis: the dancer followed his every move and, thus, seemed to be tense. Nevertheless, he sparkled with creativity.”

“In the Pocket Hall of Arts Printing House Lisauskas performed The Crossroad that he created together with Tautvilas Gurevi?ius. Here one can see the crossing of choreographic form, which demands ultimate physical and emotional output, and complex structures of visual lighting and projections. Performer, which owns strong and memorable plastic, conveyed at most the impulses of abstract music and dance. After pulling away form white cloth cocoon he created shapes that echoed half figure half abstract forms of video-projections that streaming from above.”

Cosmic Changes of Final Ignition on Nawroz – Motherly Guru’s Plea in The Land of Yoga, on Vernal Equinox, 1977

What is Self Realization (VIDEO), The Spiral Movement and RECENT Scientific Research on Sahaja Yoga Meditation: A Randomized, Controlled Trial of Meditation for Work Stress, Anxiety and Depressed Mood in Full-Time Workers