THERE ARE 3 EVENTS, EACH ONE IS UNIQUE FOR EACH CANADA CULTURE DAY. What they have in common: profound meditations, sense of union and connection, the joy of the enlightened spirit transmitted via live music performed by many great artists, 2 of them (Tim Bruce and Marie-Joelle) are joining from Europe’s BREATH OF THE EARTH magnificent show (promo video is below):

(RE) FOCUS on CULTURE DAYs in BURLINGTON – Three Events initiated and organized by Sahaja Yoga Meditation charity in Burlington, with the extraordinary support offered by The City of Burlington: Angela Paparizo -Director of Art and Culture , Adam Belovari and Bob Missen.

We as One: Bridging Meditation, Living Arts & Spirituality

Family oriented event meant to showcase the beauty of cultural diversity as well the joy that creativity, arts, wellness and spirituality can provide to any human being! Join us in the core of Burlington for the 10th Anniversary Celebration of Sahaja Yoga Free Meditation in Burlington. Enjoy live music of various genres performed by local artists as well by international singers, actors and instrumentalists; Anytime one can explore the Mystic India tent as well the ‘Cool Kids and Parents’ Tent to relax with oil massages or play with clay while shaping spiritual forms; experience guided meditations and  one on one chakra / energy centre workshops, energy balancing, art workshops and children oriented activities, Indian mythology workshops, exquisite henna palm and face painting, and participate in Greek, Indian, Spanish and Irish folk dances; Bhajans, Ragas, Qawalli, Western and Indian Classical and Folk music; Flute and Violin recitals, as well there will be a Realized Souls exhibition; Wellness items, spiritual self-help books and hand made items, including jewelry made by yogis will be made available.

Tim Bruce – actor and opera singer from UK; Marie-Joelle van der Burgt, pop singer and pianist from Holland ; Theresa Gulati, actress and singer from Toronto; Nirmal Bhakti Bhajan Qawalli group from Brampton and many more from close and from far!

Marie-Joëlle is a Dutch singer-songwriter who sings about Life and all its facets. After moving to Belgium she wrote her very popular songs Antwerp & Rain and Diamonds In Your Eyes, and now she continues to inspire people all over the world with her angelic voice, soothing melodies and philosophical lyrics. Marie-Joëlle wishes for people to find their inner Self, and by touching their hearts with beautiful music she believes to contribute in some way to making this world a better place.
Did you know? The City of Burlington signed an official twinning agreement on May 6, 2005 with the City of Apeldoorn, the Netherlands, therefore Marie-Joëlle had been invited to represent this beautiful liaison between Canada and Holland, between Burlington and its twin town Apeldoorn,

(music video) Marie-Joëlle: The Sheen – Legends of the Light

Who is Tim Bruce?

British actor and singer Tim Bruce is currently appearing with Phill Jupitus in ITVpopular comedy series Bottom Knocker Street. He appeared in the West End production of Blood Brothers, the BAFTA awarded BBC Drama Bleak House and was a semi-regular in the BBC’s long-running Geordie series Byker Grove. He appeared in the title role of William Blake in the West End production of William Blake&#039;s Divine Humanity (written by Tim, the script was nominated for the Meyer-Whitworth Playwrighting Award, administered by the Royal National Theatre); the feature films Bright Young Things, Remainder, Out of Bounds, the BAFTA awarded film Supertramp, the RTS award nominated opera film Bohème; the TV series Hollyoaks, Family Affairs, 55 Degrees North, The Gang The Krays Feared and Granada&#039;s BAFTA award-winning series In Suspicious Circumstances; Indian vocal music with Tara Arts and numerous operas for Music Theatre London, including the title role of Don Giovanni. A regular voice on BBC and BskyB, Tim has recorded over 60 audiobooks and was the voice of BskyB Channel 996.  (Tim Bruce’s website)

Event# 2 on Saturday, Sept 26 – Meditate on Self Realization with Live Music by the Lake

Join the experience of meditating outdoors, by the lake while listening to live music performed by artists that are themselves in a state of meditation and connection. True Stories of Self-Realization will be shared by  volunteers from free sahaja yoga meditation team, that are honoring Shri Mataji Nirmala Devi – the founder of this amazing movement of community services dedicated to the spiritual advancement of the human race.  Join us for collective meditation on live  violin  and piano music.  Experience Raag Durga interpreted by Francesca Smita Soni at Violin, a William Blake  “Jerusalem” Duet, Tim Bruce (actor and music therapist) and Marie-Joelle (pop singer from Europe), as well more inspirational and classical devotional music; inner centre chakra workshops with Ontario Yogis.

Guided Collective Meditation with Mar’yana Svarnyk  who studied at  Shri P.K.Salve Kala Pratishtan Arts Academy in India. Learn Balancing techniques and connect through inner energy. Apply simple chakra cleansing techniques specific to sahaja yoga meditation which is based on Indian ancient knowledge on Yoga and Kundalini energy. Collective meditation with the lead of the Life De-Stress for Youth – volunteers, with music performed by international musicians.

Important: On Sunday, September 27 these artists (accompanied by Kristine Pearson at grand piano) will also perform during the Gala offered @ The Burlington Performing Arts Centre during an afternoon of FREE arts events in celebration of
Culture Days! We will attach the program once the organizers will disclose it later this week. 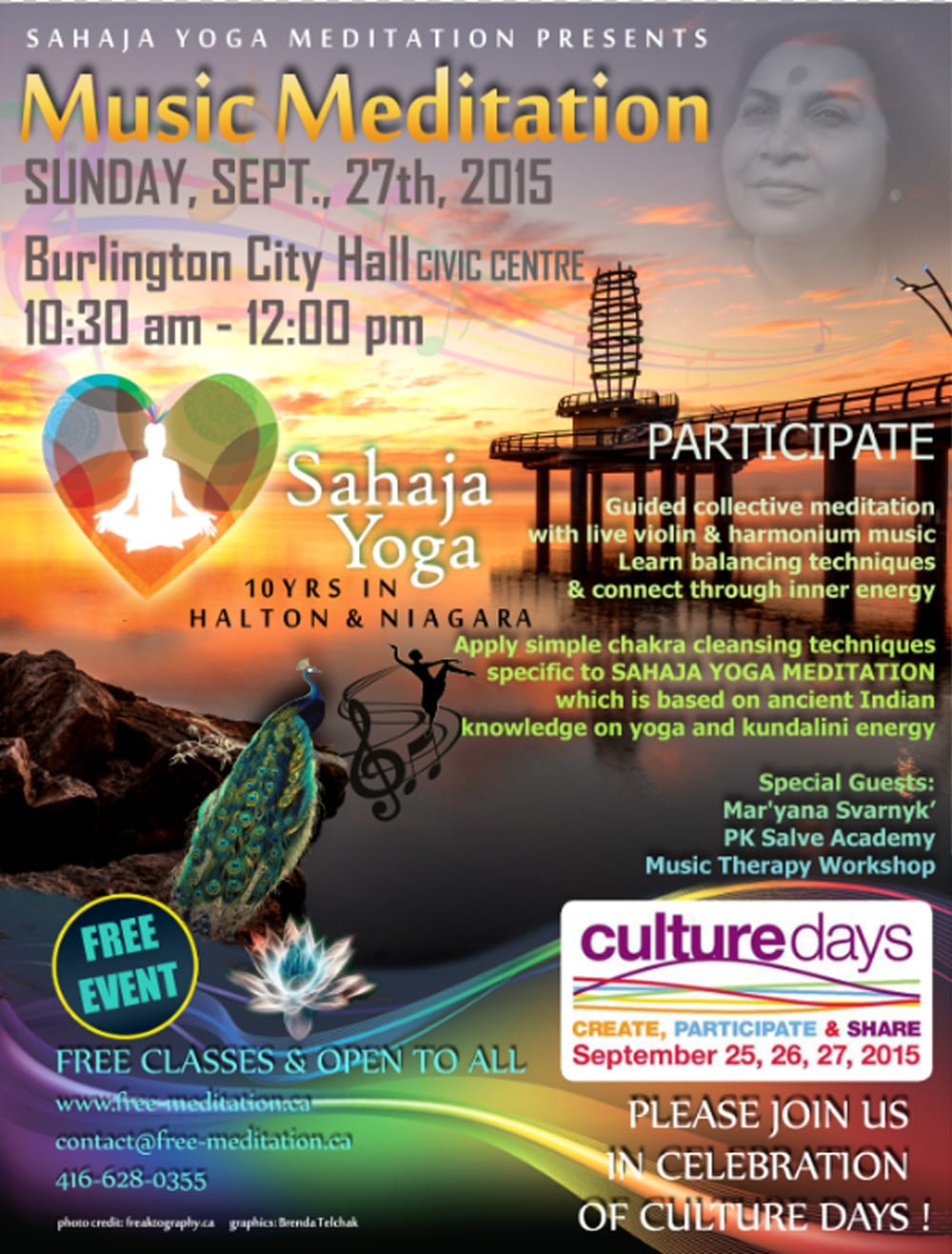 Leave a Reply to paula