Knighted by the Queen of England with the honorary ‘Knight Commander of the most distinguished order of St. Michael and St. Gabriel’ (KCMG) as a recognition from Britain for his contribution to world shipping.

Sir CP is also recipient of the Lal Bahadur Shastri National Award for Excellence in Public Administration, Academics and Management, from the Government of India.

International Maritime Organization (IMO – United Nations), on the day he passed away – July 22, 2013 –  had honoured Sir CP, remembering him as Dr Srivastava, on the IMO website, with the following article here.

The Hindu newspaper called him ‘The Man with Midas touch” and honoured him with a great press realease – article on July 24, 2013 just few days after his earthly departure  on July 22nd, 2013 .

Sir C.P about his life with Shri Mataji and his view on Sahaja Yoga

How he met  and married Nirmala Salve

“That I first came face to face with this Divinity. That was the day of my transformation.

That was the day when a Divine veil enveloped my being, from then on a Divine force, emanating from the source that you know, has been constantly with me, helping me, guiding me. And that is the secret of whatever you may have heard today. After 3rd December, I did not lose much time. And I am sure you agree I shouldn’t have. We got engaged on the 18th of February 1947, and we got married of the 7th of April 1947. And then events began to move very rapidly. Events which might have seem impossible in normal circumstances.” (1994-12.03 Excerpt from Sir CP’s introduction to his book release, when he respectfully acknowledged his consort, Shri Mataji)

“I’m not standing up because that would create a problem for the microphone.

First of all I’m very honoured, very happy to be here with my wife, and I am also very, very pleased to see all of you, see the faces which show love and divinity and dedication to your Mother. She has been talking about the role of women and that set me a-thinking. I began to think of the last 48 years that we have been married, and I just want to tell you very briefly how She has performed the role of an ideal wife, an ideal Mother and an Ideal Grandmother in the family, besides being the spiritual leader of Sahaja Yoga.

When we got married I belonged to a very conservative family. She belonged to a very radical family and it was a good complement to each other. But when She came to my house She behaved as if for generations She had lived in a very conservative family and pleased everybody. The old ladies of the house who were looking a little worried, they thought here’s a new lady from another province, speaking another language, professing another religion, how will She fit into our family?

But what She did was She won over the heart of everyone by behaving in a very modest way, in a very loving way, in a very caring way, and I have to admit that She became the favourite and I was lost.

Well that is how our family life began. I was certainly very happy about it. But then I was a bureaucrat, a civil servant, and unfortunately given to idea that absolute honesty must be observed, which meant that we had to live within our means, our salary and all I had to do was to work in office, and I left all the problems of the house to my wife. So I said: Here’s the salary, now do what you can. And I tell you She managed beautifully within our means. No possibility of anything going wrong.

We had two children, two daughters. She brought them up, and brought them up extremely well, arranged for their education, arranged for their marriage. Then they grew up, I didn’t know how, for I was from morning until late evening every day in office but … and She was in charge of the house. She looked after not only my daughters, but I want tell you this. All of us have rich relations and they care for themselves, take care, and we have in India poor relations as well, and when you are in a good position the poor relations flock to you. And they came to our house, children who needed education, and each one of them (we had some sort of hostel running all the time) each one of them was looked after by my wife in the same way as our own daughters; given the same food, given the same affection. Only She could have done that. And they have grown up, they’re now in so many places.

That was the role She played as a mother. Mother not only to my children, but to the children of the family.

And then as we grew further, She had a role to play as my wife.

I held some assignments in government in India and abroad in the United Nations.

When I was Secretary to the Prime Minister of India, about whom I have written a book now, She was the main motive force behind me. In fact I wouldn’t have gone to Mr Shastri if She had not insisted that I must go, and I went and served there. Mr Shastri had very great respect for Her because She was, of course She was obviously a spiritual person but also a very good mother, a very good housewife; and he used to ask Her: how do you run your house, what are your priorities? And She would say what She had to say, and Mr Shastri listened to that. 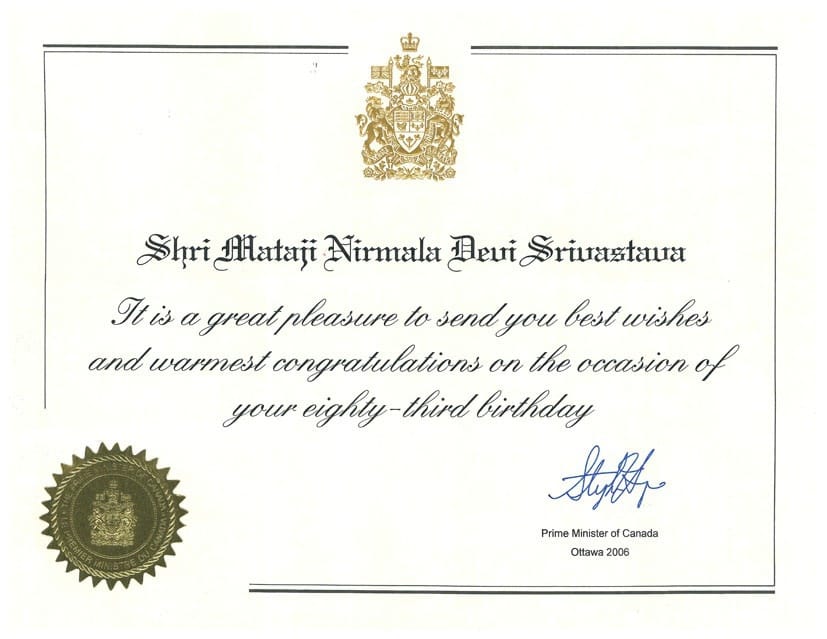 Now as a wife She played that role. When I was working with the Prime Minister sometimes I would be in the office till midnight. Why sometimes? Every day. Sometimes till early hours of the morning. But She supported me. She said, “This is your duty now, duty to your country, to your Prime Minister. You must work. Don’t worry about the house. Don’t worry about the children. I’ll take care of them.”

Then I went to United Nations. There again, my goodness me, you have to take care of one government was bad enough in India, to take care of 130 governments all over was not easy. Travelling, meeting people, receptions, dinners, a very busy life. But She stood by me, and while doing all that She was at the same time promoting Sahaja Yoga. I don’t know how She did it but She has done a wonderful job.

You know I saw Sahaja Yoga beginning with four people in London and they were wearing jeans, not very clean either. That was the beginning of Sahaja Yoga. One day I came back home and found a young boy, I’m talking 1974, young boy sitting in my drawing room, and when I entered the house he looked at me as if I was a stranger, he was the real owner of the house. So I receded. I didn’t quite understand, but what surprised me even more was that he was wearing my clothes. I rubbed my eyes. I said : Am I seeing something real or is it a dream?” Well, then I receded.

I came to my wife and I said now who, who is this gentleman? So She explained. She said , You know he’s a poor young boy, and he was almost lying unattended to, unhelped near Piccadilly Circus.” She had gone out for shopping and She saw him lying almost in a miserable condition. So She stepped out of the car, went to that boy, said: “Why are you lying here, are you alright?” He said no, he was not well at all. She said, “Is there anyone to take care of you?” He said, “No, there’s none.” She said, “That’s awful.” Then She said “Okay, hop into the car,” and She brought him home. Then he was given a wash. He had no clothes, so he had to wear my clothes, and that’s how he was wearing my clothes. And then for the next some weeks he stayed in the house, and there I saw Sahaja Yoga acting. This boy was suffering from, I think, he was in very bad shape. Within three, four weeks he blossomed. Another three, four weeks became healthy person. And then we got to know that he was from Australia. He was a young engineer who had run away from his house and was in bad shape. After he was cured he became a very good person. He came back to Australia, was united with his mother. I don’t know where he is, a Mr Gus, but that was what I saw, the miracle of Sahaja Yoga, and from those four persons, yes four I talked to they…..Once I came home and found four persons wearing jeans, and again I did not know who they were, but they were Sahaja Yogis, and they were the initial Sahaja Yogis. Well, from them to this is a marvel.

All I can say is despite all Her attention to the family, to me, (I’ve been a busy person), She has attended to all the duties of the family; She has created a new universal family of Sahaja Yoga. Each Sahaja Yogi in my view is an angel. And I mean this. I mean this because I have known human beings in the world. The world is terrible. If you look at newspapers you will see all kinds of horror stories, but when you meet a Sahaja Yogi, he or she is a very different person. The face is different, the inner self is different, the outer self is different. It’s another creation. And She has created thousands and thousands of such persons. Each one of you is a miracle.

I have worked in United Nations, in India, for 40 years. I cannot honestly say that I was able to transform even one human being. Yes, people followed my example and worked hard, but that’s not transformation. Transformation is what I see in you. And that is a miracle. That is what She has done. And now a new world is being created. I sincerely hope that Sahaja Yoga will spread more rapidly. It has spread very, very fast but it needs to spread very much faster.

I thank you very much for receiving me here. I’m delighted to be in Australia. I have liked my visit immensely already. I think in Australia the beautiful thing is that the advantages of a developed world are present here, but the heart seems to be very good, very sound, wonderful. You are open-hearted people, warm people, loving people, and I cannot say how very, very … I cannot say adequately how very happy I am and how very grateful. I thank you, Madam, for letting me come to Australia and I am going to enjoy my stay, so that’s all that I can say.

This is all that I can say.

COOL Kids were SNAP’ed in Burlington Magazine! What’s Next?! (MARTISOR on March 5th!)

Dedication to BARRIE: A Celebration of The International Yoga Day in BARRIE with FREE DANCE PROGRAM & MEDITATION & MORE — Saturday, June 11