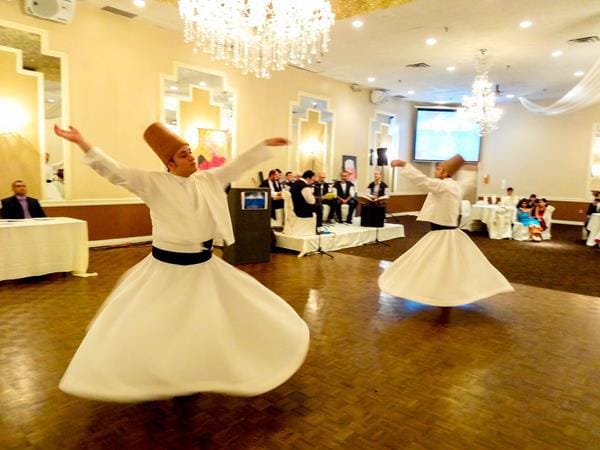 Gathered below is the feedback from some of the participants on behalf of sahaja yoga (free) meditation to Adam’s Day 2013 at the invitation of the Azeemia Sufi order. It was an honour to be part of this event dedicated to unity in diversity, as well it was a challenge because one of us had been invited to be a guest speaker and come up with a theme related to the event and represent our organization .. while not promoting it.  Also as a guest speaker coming from a group that practices meditation Ioana was not supposed to actually conduct a meditation with the audience because already a meditation moment specific to Azeemia group was scheduled towards the end of the event. So, instead of preparing a speech, Ioana chose to simply be in meditation while speaking,  allowing the inner power to feel the audience and connect with every soul present on the subtlest levels – vibrational and spiritual. Thus, the verbal communication will be pure and genuine – made of words born ad hoc by Kundalini or Ruh divine energy and Spirit that binds us all as One. The excerpt video is below. 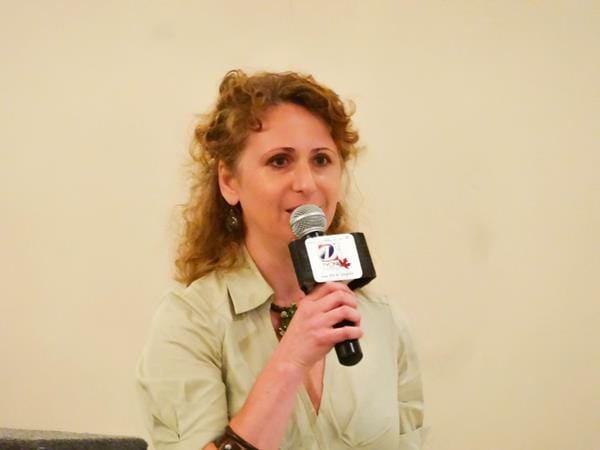 Our hosts were wonderful: attentive to their guests in all details. Needless to say that the photos speak for themselves how much we had enjoyed our time there; by the end of the event Ioana was asked to give a short interview to a TV station and we just found out that actually the entire Adam’s Day (speeches included) had been telecasted recently on TV1 Canada Rogers channel; our friends from Azeemia group will let us know if ever the event is available as a video :-). So now that everyone has ‘the facts’; let’s take the jouney through impressions, photo-album and related articles shared below. Feel-enjoy the Vibes!

To be part of the Sufi Festival was sheer joy for me. Meeting so many new seekers and having such interesting conversations with them was thrilling.
We were a small group of Sahaja yoginis there, and I felt so happy with how we were all received and how we not only all related to each other but how we all related to so many of the people there.
There were about six speakers from different traditions, including a Rabbi, Reverend, Multi-Faith Leader, and a gentleman (a University PhD. Professor I believe)  who talked about many of the Hindu sacred texts, as well as some speakers who talked about Sufism; some of these presenters talked from both a scholarly and spiritual perspective bringing history, tradition, dynamism and openness to the forefront of awareness.

As guests of this Adam’s day event, we also had the blessing to introduce Sahaja Yoga Meditation to the group and

Ioana’s delivery and the vibrations that filled the air was awesome; the words were gentle, natural and spontaneous.
A true spark of light and deep love is what I felt. Calm, natural, and sincere are just a few of the virtues and emotions that emanated from her. I celebrate this.

Seeing how everyone had opened their palms and how keen they appeared to participate, I felt that the vibrations that filled the room were pulsating so beautifully.

I was very honest about what I said about what Ioana said!  I wish there was a tape-recorder so you could hear –trust me, it was awesome!!!   I was trying to be gentle with what I wrote about her because I was thinking she might be shy–so that is the reason I asked her permission if I can write that! 🙂
The experience I had at the Sufi Festival was very heart-touching. The people I met felt like family – I felt as if I have known them all my life. The sincerity, warmth and true seeking pulsated vigorously in the atmosphere. The speeches, both scholarly and spiritual, were a blessing to listen to–respectful, open, and honest sharing. I felt ‘awakened’.  I felt the presence of God’s love.
The Dervish dancing was mesmerizing. The music was mesmerizing.
And in the flow of such tenderness, was Silence. It is an experience I will truly treasure.
Thank you again for making it possible for me to have gone to the ‘event’. 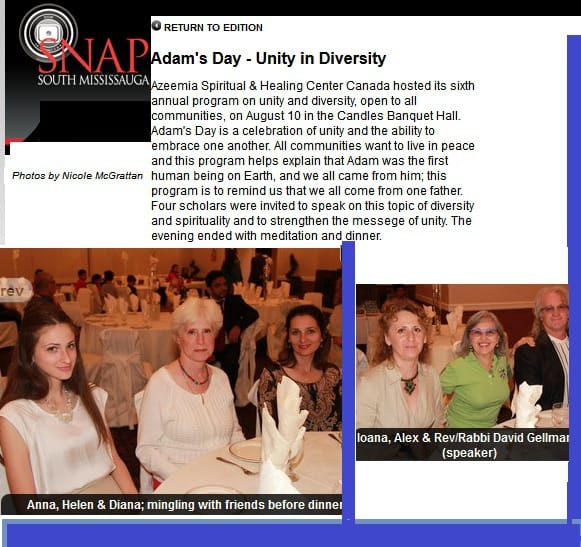 I was a bit uneasy thinking it was a big challenge due to limitations imposed to us. I was really putting all my attention on you at the moment you started talking. By the time you asked them to open their hands the cool breeze was oozing the room. Mother was there. I also noticed how the people were giving you a lot of respect and how respectfully they presented Sahaja Yoga – Freemeditation, how they approached  you after your speech.

The people there were just fabulous! 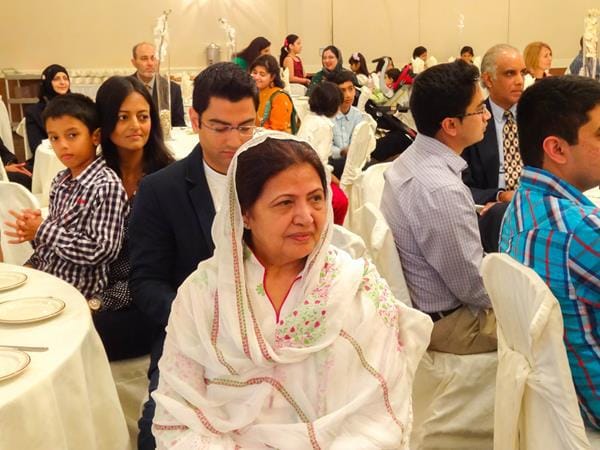 I shared the table with 2 wonderful women that could not have been more opposite to each other:

One of them very well educated and has been in the seaking path for a while we connected immediately she said she had listen to “Mataji’s talks and that she admires Her”. (* Shri Mataji is the founder of Sahaja yoga meditation)
The second one very humble person, beautiful being.  I gave a free meditation card to both of them.

I was amazed at the talks from different groups and how similar are their goals and beliefs to ours. Another highlight was the Derviches dance, wow, the voices of the singers and their instruments just resonated in the room raising the vibrations and making all the people present at the hall to feel as one.

I felt that the hosting Azeemia group was really welcoming us and shared their event with us and made us an important part of their presentation. To top it all up, the food was excellent. 🙂

Very organized, pleasant people, liked the Sufi dance meditation combined with the music. I think music and art is a great path to our unity from diversity. From a sahaj point of view, Ioana’s speech was phenomenal, great choice of words and spontaneous action. We should invite the Sufi group at our events, the Sufis might enjoy also the company of sahaja yogis, discovering their/our qualities too 🙂
Love and cool breeze,
Daiana

The highlight for me was feeling a cool breeze in my hands when a young person had recited in Arabic from Koran. That is what we call, ‘a sahaj experience’ that transcends any man-made barriers.

On a personal note, the first good omen during the event was to feel like a cool wind of vibrations coming up and literally spiralling around me from the feet towards my crown chakra and beyond – as a response, after I prayed in my heart to Shri Mataji, to “be here with us”, so the Holy Ghost – Ruh – Kundalini energy to be experienced by everyone present; secondly i enjoyed so much the live Sufi music – by listening to it, I travelled back in time when I had visited Turkey as a student yogini with few other hundred sahaja yogis from Europe and we all were mesmerized by the Sufi group that sang at the invitation of Shri Mataji during an intimate but large gathering of yogis and Sufis. I remembered fondly of Shri Mataji’s motherly care to nurture and broaden us spiritually, how She was teaching us about Prophet Mohammed, Hazarat Ali and Fatima Bibi; I remembered how deeply profound was the meditation state for all of us for days together. Then, 20 years back was the first time ever I had listened to this type of music but my soul felt like “at home” then, as it felt ‘now’ at Adam’s Day. Another very sweet moment was after the speech when dear Carmen rushed to embrace me, telling that tears came to her listening to ‘those words’; that sisterly love was so palpable and the feeling was of “us, together in pure love” – no separate “I”ness was left.

** all photos from this album were graciously shared with us by our friends from Azeemia group. Thank you!

Later on I was touched by the video speech of Hazrat Khawaja Shamsuddin Azeemi – the head of the Azeemia Sufi Order – in which he explained the profound meaning of the simple salute ‘Salam’ as well the case he made on the reality that should be obvious to all human beings: that we are all brothers and sisters in our Creator’s hand. 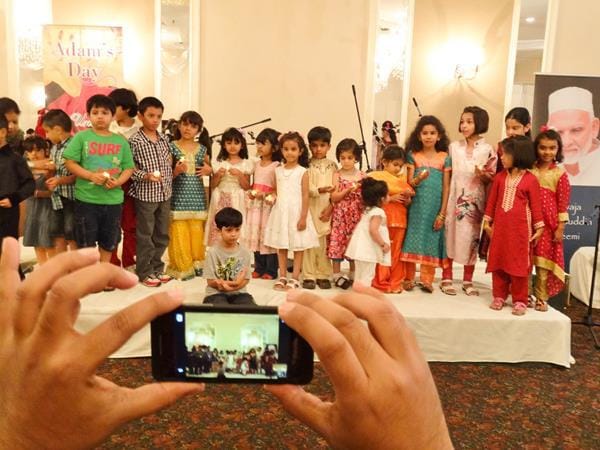 prophets and divine incarnations were quoted to reveal their harmonious unity in spirituality. I remember fondly of the discussions around the table with such lovely people (everyone was very famous in his/her own right) and it happened that all of them were from Pakistan but had ‘Romanian connections’: some had good Romanian friends and others had visited Romania many years back, but still remembered names of towns as well the natural beauties they enjoyed.  What were the odds for us to meet at the same table?!

The core sahaj experience is that I felt Sadaf like a sister to me, since our first conversation over the phone,

as well Kamran and Emad like brothers (all three of them are leaders within the Azeemia group); as well I was deeply touched to see how people from the audience, women and men, would approach me so naturally, just to say that they were touched by ‘the speech’; and a last memorable instance was when a great scholar and guest speaker at this event had stopped on his way out to chat with me and my daughter on spirituality and on-line meditations :-).

We are definitely looking forward to reconnecting to our Sufi friends and we will definitely invite them to our special events.

Enjoy related articles/experiences  + Watch the Photo-Album from Adam’s Day further down below.

(click!)  Meaningful Dreams & The Journey of a Muslim Seeker

(click!) Meditate on What a Mother gives us & How we repay her– Blood, Vibrations & Chakras – Did you know from Islam’s Prophet to Tropical Cancer

(click for compilation) Awaken the Beauty of Permeation in Swadhisthana Chakra – Say “I am You” with Rumi!

The Photo-Album from Adam’s Day

** all photos from this album were graciously shared with us by our friends from Azeemia group, thank you! The SNAP Mississauga South article was sent by Carmen and we shared ‘a bite’ of it within this article. From all our hearts, a big thank you to the Azeemia Spiritual and Healing centre Canada for their invite to Adam’s Day 2013.

Leave a Reply to Shivangi & Nehit