CRA & Sahaja Yoga Meditation: Standing Together for Health in Community

Peter‘s recollection: “Earlier this year, through the Halton/Niagara website we were contacted by the Canada Revenue Agency. But, for a good reason.They were having a Health Fair at two of their GTA offices and were looking for community participants who could improve the health and lives of their employees. After talking to the CRA organizer, who explained that because of some restructuring and budget cuts there was some stress in the office, she was quite excited that we would come and talk about Sahaja Yoga and maybe do some meditation.  Both locations were being done simultaneously, so we easily organized a team from Halton and a team from North York. At the location for the Halton team we had a table, along with probably a dozen other service and product providers, and also an opportunity to address an employee group for 20 minutes in a large meeting room. From the moment we set up our table we were giving realizations to the other exhibitors and the organizers and then the CRA employees came in droves and the four of us were constantly engaged with new seekers. Not knowing who our audience would be, we had to explain to the disappointed organizers that when doing our presentation in the meeting room, there would probably not be enough time to do a meditation.

But it turned that the higher power had different plans because after 10 minutes the audience were calmly and contentedly focused, and after affirming that we were all the pure spirit we settled into a good 5 minute meditation. Many participants were so grateful and surprised by this short experience and several came after and joined the steady line up at our table for a workshop. We were easily the biggest attraction at the fair and, from all indications, we will be blessed with an ongoing relationship (the good kind) with the CRA.”

Enlightenment at the Canada Revenue Agency

Paula‘s recollection: “Peter graciously carpooled Indu, Perviz and myself to the Health and Wellness Fair

held at the offices of the Canada Revenue Agency. Although we were apprehensive that, perhaps, people might be a bit stressed during this busy tax time, we were warmly welcomed by organizers, vendors and seekers of truth.

Lovely people poured into the Sahaja Yoga booth to get their “self-realization” experience through chakra clearing workshops and mini guided meditations of 2-5 minutes. Once the government employees had their mini meditation, they were so relaxed and happy they wanted to share it. Word of mouth supplied us with a  flow of new people for several hours. A simple and effective method known as “thoughtless awareness” was shared. As much as possible, we customized our one on one mini-sessions to address questions. Some noticed they were watching their thoughts as they strove for Thoughtlessness. Others noticed the noisy buzz of hundreds of attendees fade to the background as they managed to achieve mental silence.

A few people felt the subtle divine cool breeze of Kundalini awakening above their heads. One lady who had felt the vibrations wondered if she could incorporate it with her morning prayers. She was so happy to know that she could integrate the “yoga state” to with her current practice.  Open hearted participants were pleasantly surprised to feel a wave of inner silence. A few people could not believe how time stood still even within a 2 minute meditation. Quite a few felt a new awareness being revealed through tingling in their hands and both cool and warm breezes known as “vibrations.” 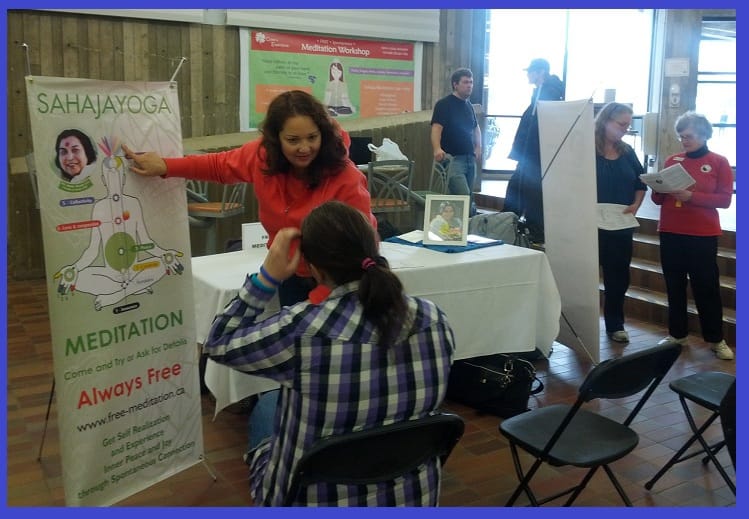 We passed on some simple methods to clear the path for Kundalini energy to gently flow through and purify the energy centres. People were very curious to connect and “know themselves.” We explained the power nature has to purify our attention simply by enjoying its variety and sitting on mother earth.

In the meantime, Peter conducted a 20 minute seminar for people seeking calm and peace within. He taught a large group of employees about the subtle system and the sacred energy we all have inside. Peter went with the flow and managed to squeeze in a meditation session for everyone to enjoy. Even employees who did not get a workshop looked on and helped themselves to colourful, informative brochures. The flyers announced free meditation classes in North York, Ontario, and indeed, the whole world.  We were, however, not the “do-ers.” We were instruments helping others to feel the wonderful, soothing cool breeze which can also feel like a waterfall inside. This cool breeze has been described in ancient texts for thousands of years. Mass enlightenment is achievable in this lifetime thanks to the unique discovery of Sahaja Yoga. Each of us conducted  chakra clearing workshops on no less than 20 people. Including the meditation seminar taught by Peter, between 80 and 100 government employees benefited and received free information linking them to community resources, scientific health studies and online meditation. Actually, the Health and Wellness of anyone and everyone only benefits of this spontaneous gift of in-born connection that is open and free to all.

Learning about and experiencing “mental silence” together had enlightened people to the possibility of achieving a new awareness that was limitless in scope.”