“Give thanks for unknown blessings already on their way”

This is precisely what we’ve felt  that weekend when we were heading towards Tobermory.

However, once we’ve arrived, we couldn’t find any place to stay; the closest town with available rooms was at almost 2 hrs drive from there.

The weather was not inviting at all, wet and cloudy plus it was already evening so we had no regrets when in full agreement the decision was to better get back home.  Taking a long stroll along the bay and enjoying  a nice dinner at the most recommended place in town – romantically facing the lake and having a small but crowded garden with beaming Daisies; that’s how we befriended Tobermory.

On the way home, we didn’t drive more than 15 minutes- still in Tobermory  when we’ve spotted few cars that were parked along the road and their crews were filming attentively the large fields on the side. Our eyes caught instantly who were the stars of the filming action: a large dark  Momma Bear and her cub that were obviously the anonymous owners of the place. Felt immediately to say “Thank you” in my heart for this silent farewell-greeting and  captured the moment that is now shared with you.

In Tobermory we were told at some point that Next day, a Sunday, it was the biggest North American Pow-Wow in the neighbouring Manitoulin Islands and it was a bit  weird that we didn’t have an extra (divine) help to be able and attend it. Little we knew that ‘back home’ in Halton, the rest of the weekend will become genuinely a Native Indian journey, with Mother Earth speaking to us through her children: people, forest, animals and birds.

Next day we’ve visited for the 1st time the Crawford Lake in Milton, just at the border with Burlington and so beautiful connection we’ve made with the history of that place that holds as well an Iroquois Village and such beautiful trails.

The most impressive moment, a real welcoming gift was when we’ve seen the vultures so elegantly diving in the sky above the Valley and there was a strong impulse – desire to watch them from closer.

Taking the trail back through the forest one of the vultures simply cut our space above and we’ve heard him choosing to rest on a tree nearby. Incredibly, it was right above us and graciously allowed us to take his photo.

It was such a gift literally coming from the sky – we were looking up and would see this vulture projected on the sky.  Shortly we’ve seen it  moving a side and unexpectedly the 2nd Vulture sat on the branch. 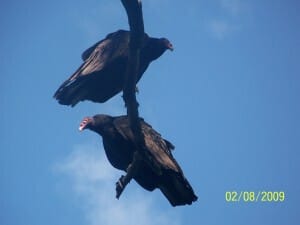 We were watching now how both of them were sharing same branch. Then it came the culminating awe-moment: both vultures with synchronized movements moved aside, making some room for the 3rd one, coming from nowhere. This was definitely a moment of grace that is a must to be further shared.

After witnessing this lesson of sharing and peaceful coexistence from creatures of this land, we’ve continued enjoying Mother Nature’s  beauty, the light in the forest, each rock and plant (check this for all photos) we’ve met on our way, the fragrance of earth was so freshly pleasant and easy on our senses. We felt light in our Spirit, Heart and Mind.

According to research by John Steckley, Professor of Anthropology at Humber College , a version of the Wendat/Huron word for vulture was “Tsanhohi”.

Apparently, this was one of the most revered names for people in the Wendat/Huron culture between the 17th and 19th Centuries and images of vultures on artifacts from these time periods are to be expected. He states that it would likely hold a place of honour, comparable to the Eagle in the Western cultures.

I’ve also heard/read stories about how the vulture got a bald head and feet by carrying the sun, as he was the bird that could fly the highest.

Here at Conservation Halton, the Turkey Vulture is our mascot (nicknamed “Professor TV”, or “Tidy the Turkey Vulture”), and is on our company logo. They nest along the edges of the Niagara Escarpment, so are readily from Spring to Fall. They also are invaluable to us in that they keep the environment clean and free of disease by eating carrion. They have special digestive enzymes that are able to break down bacteria and disease that would make many others deathly ill. They are also the only bird that has a well developed sense of smell..

Next day it was our time to share – this time the gift of awakening Kundalini energy in people and spreading good vibrations in nature and community. Where? At La Salle Park during the Joseph Brant festival. And there I have found myself at the end of my Native Indian Journey of that weekend, meeting the buds of the local Native Indian Tree – the 7th generation coming from Joseph Brant’s roots – where the future had met the past in the present. And the journey ended in the most beautiful and symbolic way.

We were all sharing peacefully and joyfully our Home: Canada

Leave a Reply to Ivana